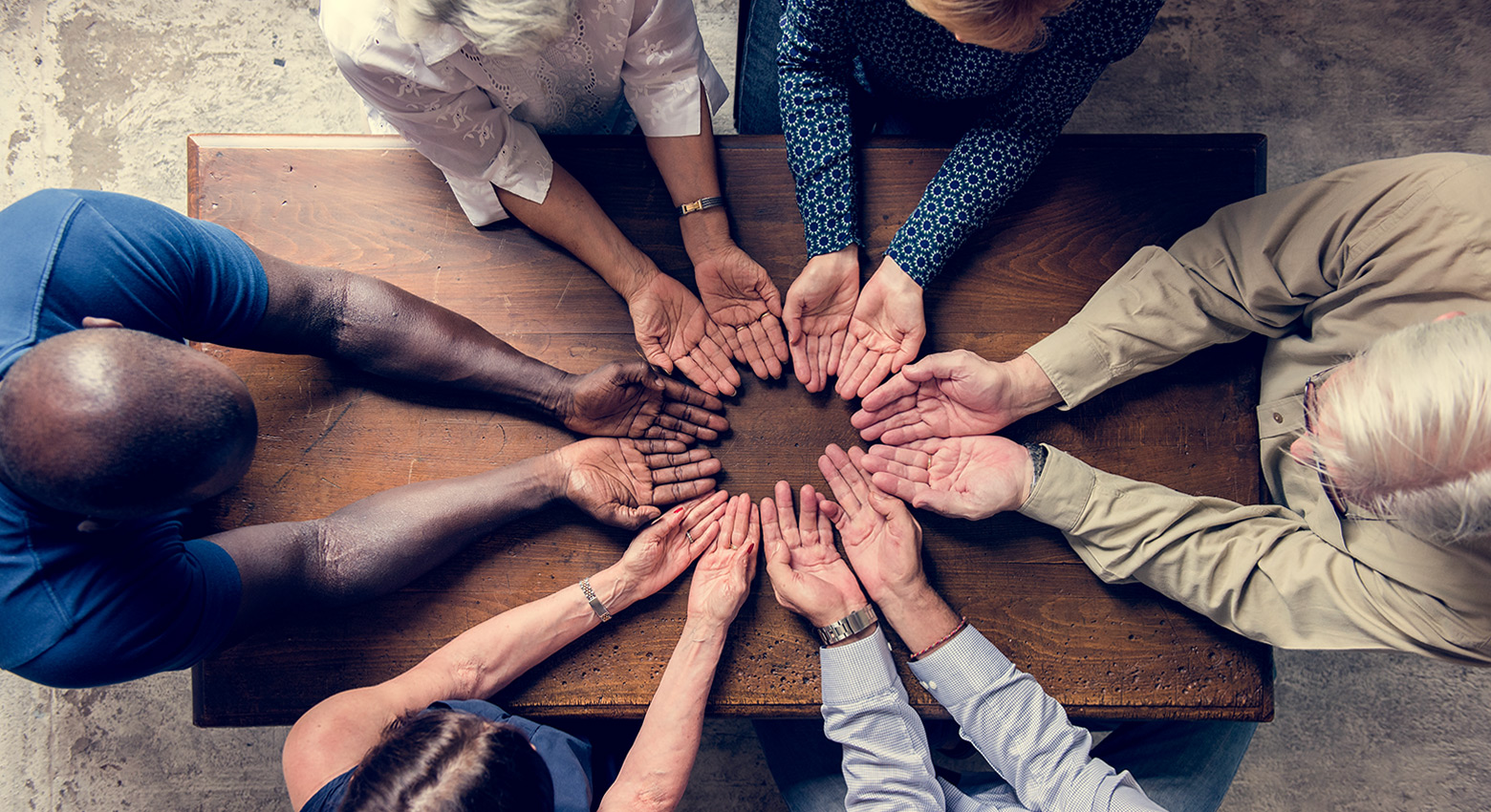 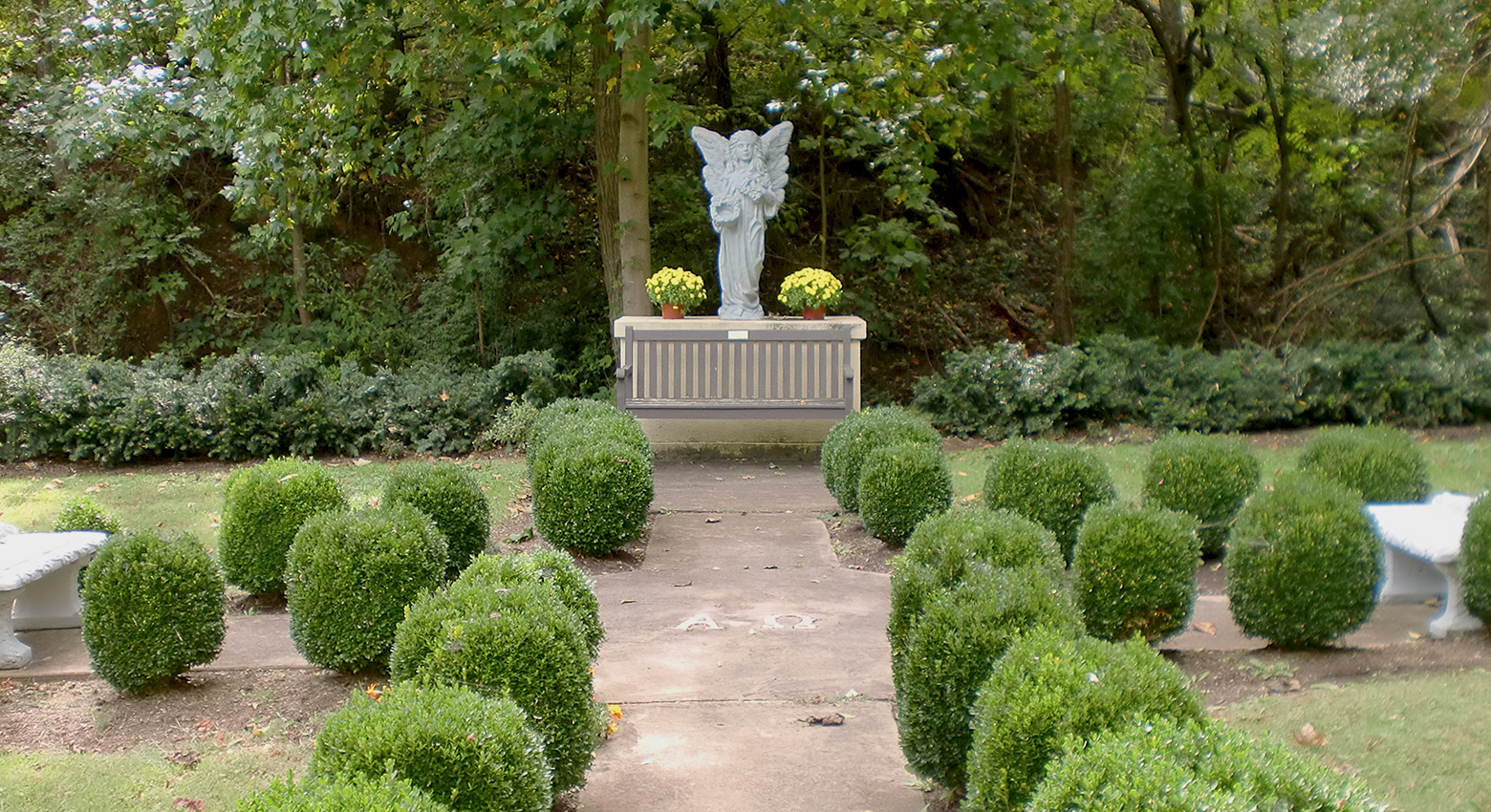 Our first principle states: “We believe in God as Infinite Intelligence.” God is not a personified being sitting upon a throne- neither male nor female but containing both – thus you may hear many of our ministers say “Father-Mother God.” Our understanding of God is more Panentheistic. (We are not referring to the gods and goddesses of the Mesopotamian myths.) PANENTHEISM removes these obstacles. The Greek roots of the word mean “everything (pan) is in (en) God (theos).” The middle syllable en has a double meaning: everything in God, and God in everything.

To cite the most concise biblical expression of panentheism, God is “the one in whom we live and move and have our being” (Acts. 17:28) Notice how the language works: Where are we in relation to God? We live in God; we move in God; we have our being in God. GOD IS NOT SOMEWHERE ELSE, but “right here,” all around us. God is the encompassing Spirit in whom everything that is, is.

“THE MORE” is all around us and within us; the universe is shot through with the presence of God. Thus God and the universe are not completely separate; rather, the universe is “in God,” and we, and all that is, are “in God.”

We take the Bible seriously, but not literally. We do not accept the Bible as the inerrant Word of God! It has been translated many times and was written as part of the culture and social experience of that time. The “inerrant word of God” has supported throughout history a wide variety of completely discredited practices. The Bible was quoted to claim that kings rule by divine right, that the earth is the center of the universe around which the sun rotates, that slavery, segregation and apartheid are legitimate and moral social institutions, that women must be kept in second class positions, that evolution is wrong and that homosexuality is a condition condemned by God. In each of these cultural debates the Bible has lost.

We read and use the Bible as a book of the light of the soul, a metaphysical history of transcending consciousness—that is, a history which tells the story of human consciousness constantly rising above culture, environments, difficult situations, and trying events, including self-imposed limitations. “Thus Holy Scripture is a book of guidance, instruction, and teaching intended to enlighten humankind. It is a record of Hebrew law, drama, sacred history, poetry, philosophy, psychology, and religion.”

We may also think of God as the “Absolute.” According to the Genesis narrative, all things are created by God, exist, and are made manifest. Everything subsists in essence, and nothing exists without essence. The universe and humankind are manifestations of God and reflections of that Essence. Many believe that the earth was created in seven days. The number seven in many schools of numerology mean something was finished, completed, not literally seven days.

We can spend countless hours debating the big bang theory versus creation, etc.; however, remember that we internalize the scriptures. In light of this, how do we relate to “darkness?” Many teach that only light and the color white are symbolic of God. But darkness and the color black are also representations of God. Darkness, as a metaphor, presents God as the Inscrutable Source, the Unknowable and the Unmanifest. According to the early Egyptian writers, the first principle is characterized as darkness because it is beyond all classified and rational conceptions. We see the creation process beginning at the commandment, “Let there be light!” We see Divine Order taking place as names were given to things, such as day, night, and so forth. “The Hebrew cosmological depiction of a God-created “good” world in the biblical story is the ultimate purpose and destiny for the human family.” (The Mysteries of Creation) Rocco A. Errico

The term angel in Aramaic has many meanings: ambassador, messenger, preacher, a good man, holy man, a man of God, principal elder, minister of a congregation. In the book of the Revelation, John was asked to write to the angels of the seven churches in Asia Minor (Turkey) meaning to the head ministers of the seven churches. Angels, malakheh, are also considered spirits. (Aramaic Light on Genesis) Rocco A. Errico / George M. Lamsa

In some Kabalistic circles Angels are God manifesting, for example, as the four main elements of earth life, earth, air, fire and water, and man personified them giving them individual names.

“Adam and Eve are representational of humanity and are fictional characters who have become historicized. The narrative of the transgression of Adam and Eve, their punitive consequences, and exile from paradise is the story of what humanity continually endures by constantly seeking power over others. The tree of the knowledge of good and evil represents power—that is, becoming gods. Human beings have the tendency to self aggrandizement and deifying their own powers. Knowledge bestows power. One can use it to control and manipulate or bless and advance humanity into a new state of enlightenment and understanding.” Aramaic Light on Genesis” Rocco A. Errico/George M. Lamsa

Metaphysicians do not accept the concept of original sin! They believe that this is the beginning of man’s individual journey. The Christological interpretation is that only through accepting Jesus as your personal savior are you saved from “original sin.”

To the Metaphysician, death can be as beautiful as birth. We have an earth birthday, the day we are born, as well as a spiritual birthday, the day we are born into Spirit. There is a saying that says “Weep for the coming in. Rejoice for the going out.” Weep for the coming in because we do not know what that child will go through in their lifetime. Rejoice for the “going out,” because all theologies teach of something better than this life. We believe that all of our relatives, friends, teachers etc., will be there to greet us.

Metaphysicians do grieve! We grieve the physical loss that is apparent, we are not in denial. However, we can rejoice in their great gain. “Death is not the opposite of life, it is the opposite of birth.”

We believe that JUDGEMENT is automatic, logical and unavoidable. We do not believe in a personified God sitting upon a throne with a large book in his hands judging where you shall go! As we live our lives, we accumulate and create a vibration which is uniquely “ours.” When we pass from this world to the next, we shall go automatically to that sphere or place which we vibrate with accordingly. For example, if we measure sound waves….Middle C will only be in unison with Middle C. Our vibratory rate will take us to the place where we belong. In other words, we will be in a place where everyone is “just like us!” Imagine! However, our 9th Principle teaches us that we do not believe in eternal “damnation.” In other words, when we have had awareness of our wrong doing and thinking we can then begin to progress.

“In my Father’s House are many mansions.” Metaphysicians believe that there are spheres and gradations. According to the school of numerology you will hear different concepts. One will teach there are 7 gradations and 24 spheres within each gradation and then when you reach the 7 gradation, 24th sphere, you are back to God, which is also the number 8…which goes on forever. Another school will teach 12 gradations, etc. The important concept is to have awareness of vibrational levels. The orthodox version of Hell is a geographic place consisting of fire and brimstone, etc. We believe that some of the early church fathers traveled astrally to the lower planes where there was much hatred, jealousy and greed, creating clouds of darkness. Thus when they returned they referred to the darkness as “great clouds of belching smoke like those from Gehenna.” Gehenna is outside of Jerusalem where they burned the trash. Thus, where there is smoke, there certainly must be fire. We hear many Metaphysical folks saying, “I don’t believe in Hell!” What they should be saying is “I don’t believe in the Orthodox conception of Hell.” We have all heard and read “Heaven and Hell” are states of consciousness, and that is true, here or hereafter!

This is a subject that has split many Metaphysical groups. Many who believe in spirit communication will argue that it would be impossible to communicate with their spirit loved-ones if they reincarnated. When we study the subject of reincarnation, we must realize that there exists a possessive personality factor. That is, we all know that we cannot possess anything, even our own bodies; we will have to die and go on. However, many times we possess relationships to various folks we have left behind, our husbands, wives, sons, daughters, friends, etc. For this reason, many would not want to reincarnate.

There is also the argument that if reincarnation does exist why are there more people on the planet now then ever before. Where did they come from? Well, one answer is “new souls.” Another, “other planets.”

Past life information can be of use to us when it explains something that is taking place in our lives, etc. Dr. Ian Stevenson of the University of Virginia did over 500 research cases of past lives with children. Over 200 of these cases had physical deformities and would start telling under hypnosis of an incident that related to their scars or deformities. His book, Twenty Cases Suggestive of Reincarnation, is considered a classic in its field.

Metaphysicians all agree that it is what we are doing NOW, that really matters. We cannot relive a past life and why should we want to? The subject of reincarnation should be discussed and investigated the same as any other metaphysical theory; however, it is up to the individual as to whether or not it is valid for them.

An Aramaic idiom which means “You deceiver you!” We believe it is radical left brain “stuff,” not an individual.

“The Aramaic word for devil is dewa. Dewana is the adjective of dewa and means “insane.” A similar word that Aramaic speaking people use is shedana. This Aramaic word means “a demented person” and refers to one whose talk is jumbled and whose mind is unbalanced. Although these terms sound strange and also refer to so-called invisible spirits called demons and devils, they are really the names of diseases known to the ancients.” (Aramaic Light on the Gospels of Mark & Luke) Rocco A. Errico/George M. Lamsa

Webster’s definition is “done or suffered by one person on behalf of another or others.” Metaphysicians do not believe that another person can suffer vicariously for their wrong doings. Our fourth Principle states “We believe in personal responsibility and that we create our own happiness or unhappiness as we live in harmony or discord with natural physical and spiritual laws.”

Theologians cannot agree exactly who wrote Revelations. Most agree that it was John when he was exiled on the Isle of Patmos. Fundamentalist preach that this scripture is describing the end of time or “The Rapture.” Most Theologians think this was about the conclusion of the ministry of Jesus, not the end of time. This is the version that we accept as Metaphysicians. We can also internalize this scripture for an indepth study of our own spiritual progression.

Experience our 21 acres of beautiful lawns and gardens and our peaceful chapel, library, bookstore, cafeteria and class rooms.  We welcome you to visit our sanctuary, buildings and Gardens.

SERENITY AND LOVE AS A WAY OF LIFE

The metaphysical church does not accept the bible as the infallible word of god, but as an inspired collection of stories based on the spiritual laws of the universe seeking to help man unfold his own divinity.